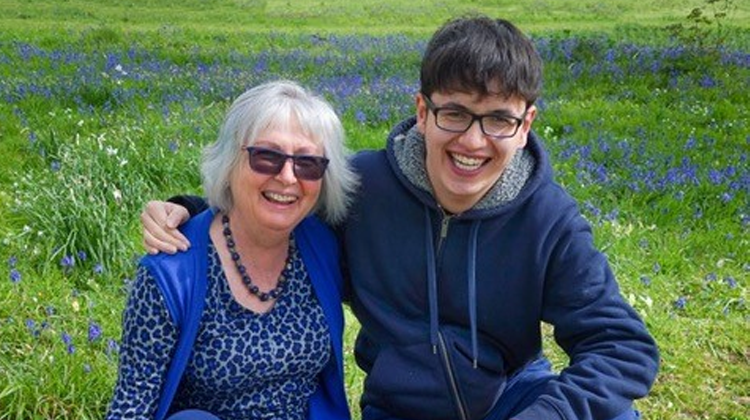 The pandemic and lockdown has created monumental changes for young people.   Parents of young people with half a heart have been living with fear and anxiety.  Those with added learning difficulties have has less support and feel left behind.

Maggie Raja and her son Daniel, 17yrs, talk about the challenges they’ve faced.

Can you tell me a little bit about your experiences of shielding with Daniel over the last year?

Maggie: Our world changed with just one phone call from the school a few days before national lockdown, explaining they were concerned about the risks of Daniel being there and suggesting I collect him. We had just moved house on March 12th, so there were huge mountains to climb to sort out our new home. Once we were asked to shield, we had to rely on kind people we knew bringing things to the doorstep for a few weeks. Every phone call to sort out utilities etc. took ages. After a couple of months, we were finally able to get priority slots to order groceries online. Just being able to choose our food again was life-changing. Thankfully, I had got broadband in just before lockdown, so Daniel was able to access his A level school-work. He worked consistently to the best of his ability, but found it very hard not to be able to ask for explanations when he didn’t understand some aspects. We made our own timetable, focusing on school work when he was freshest.

It was challenging having hospital appointments delayed, and trying to deal with the GP by phone. Daniel suffered a 3 month ear infection over Summer 2020, which we couldn’t get on top of until a kind GP put on PPE and examined him, then tried different antibiotics.

All Daniel’s transition appointments have been postponed, and no final decision has been made yet on closing his fenestration via keyhole surgery, though he had an MRI to explore that possibility in January 2020.

What have been your biggest challenges in terms of education and school? How has Daniel managed out of the school setting?

Daniel: The greatest challenge was trying to keep the work schedule organised in addition to keeping track of assignments. Eventually, I was able to become used to the channels the schools used to communicate (2 schools for different A level subjects). Gradually it became the norm.

Maggie: I am very grateful to Daniel’s main school for agreeing in September 2020 to an extra year in Form 6 on medical grounds. He was just coming out of a 3 month ear infection and absolutely exhausted when school re-opened then. He postponed one A level completely to focus on the other three (Computer Science, Biology and the compulsory Welsh Baccalaureate). Thanks to this decision, he has been able to work consistently at a pace he can manage. His target grades are good and we hope for the best outcome this August, so he can use the extra year to gain more UCAS points for University entrance rather than have to resit. However, stress has already caused him to blank out in one assessment.

Apart from school, Daniel has been very fortunate to be involved in some great groups which went online during the first lockdown. He is part of Hijinx North Youth Theatre, and has done a lot of film-making with and for them. This went very well, and he was recommended by them for other online opportunities. He did a Summer animation school with the Cardiff film festival, and since January he has enjoyed writing an audio play on a course with the Sherman theatre, Cardiff. This is being rehearsed by the cast and will launch on the theatre website soon. He also participates in an online poetry group which used to meet at Venue Cymru theatre, Llandudno. During February half-term he studied for an entry-level qualification on British Film Academy course run online by TAPE, Colwyn Bay.

The hardest thing has been anywhere safe to stay mobile. Walking out the door is not safe, a busy housing estate. In Wales, many car parks at scenic locations were shut for months, as were National Trust gardens where booked slots allowed us to exercise safely while shielding. We are delighted some of these opportunities re-opened the week before Easter.

How has this affected Daniel as a teenager and his mental health?

Daniel: It has been very detrimental on more than one occasion. I have been struggling with depressive thoughts.

Maggie: I am very grateful that because Daniel has respite at Ty Gobaith Children’s hospice, we have been able to access telephone counselling except when the only counsellor not furloughed became ill herself for a couple of months. This has helped. A friend who is a retired medic has also advised, and there have been other Zoom support calls. However, Daniel has suffered chronic anxiety, panic attacks, sleepless nights etc. Ty Gobaith kindly offered some music therapy sessions about three months ago at a particularly low point, which helped get him through the Winter.

How are you managing the next stage as the country thinks of releasing lockdown? How does this make you and Daniel feel?

Daniel: It makes me very optimistic for the future.

Maggie: Daniel has received both doses of Pfizer vaccine, and this is a huge relief. Because he had antibodies from the first dose, he risked returning to A level lessons when these re-commenced 2 weeks before the Easter holidays. I chauffeured him outside normal school taxi hours so that he was in the building the shortest possible time. After that, shielding in Wales officially ended by April 1st.It has been possible to get out in the sunshine a bit and start re-building mobility, which is great. We are also thrilled that Daniel has just been able to start driving lessons.

As a single parent-carer, I remain exhausted beyond words. It has been a long, difficult Winter and this half-term marathon of A level assessments is extremely stressful for Daniel’s mental health. I am extremely grateful that the hospice provided a short respite break the week before Easter, giving me my first chance for months to go for longer walks and think straight about priorities for the next few weeks. My own second Astra-Zeneca jab as an unpaid carer is not until late May, so it’s another few weeks before I can relax further about the risks of my becoming ill and our little household being in crisis. I am very conscious that Daniel depends on me. I was short-listed for a job when Covid hit, but realised it was impossible to take on paid employment and care solo 24/7 throughout shielding.